Home   : :   Throat Treatments
What is a tonsillectomy?

A tonsillectomy is an operation process to remove the tonsils. Tonsils are two small glands situated in the back of the throat. Tonsils help white blood cells to fight against infection, but occasionally the tonsils themselves become infected.

Tonsillitis is an infection of the tonsils that creates swelling and give a sore throat. There are few symptoms of tonsillitis which include trouble while swallowing, fever and swollen glands around your neck. During consultation doctor may observe redness in the throat and tonsils covered in whitish or yellow coating. Sometimes, in some cases, antibiotics or a tonsillectomy might be required. Tonsillectomy is also treated for problems like breathing, heavy snoring and sleep apnea.

Who needs a tonsillectomy?

Tonsillitis and the requirement for tonsillectomy is more prevalent in children than adults. However, people of any age may face difficulty with their tonsils and require surgery. Usually the Tonsillectomy treatment is given for those who are frequently disturbed with tonsillitis or strep throat. Tonsillectomy can also be treated for other medical problems like: bleeding of the tonsils breathing problems related to swollen tonsils cancer of the tonsils frequent and loud snoring periods in which you stop breathing during sleep, or sleep apnea.

Two weeks before Tonsillectomy surgery, stop taking any anti-inflammatory medicines like ibuprofen, aspirin and naproxen. Consumption of these drugs may increase the risk of bleeding during and after the surgery. Let your doctor know about your daily intake of vitamins, medications or herbs. Before the tonsillectomy, one should keep stomach empty as it eases the feeling of nausea from the Anesthesia.

There are various methods to remove tonsils. One standard way is called as “Cold knife (steel) dissection” in which the surgeon clears away the tonsils with a scalpel. Another standard procedure for tonsillectomy necessitates the burning of tissues through Cauterization process. In some tonsillectomy procedures, Ultrasonic vibration (using sound waves) is used which generally take about half an hour.

During the recovery process after Tonsillectomy surgery, patients may experience some pain like sore throat, pain in jaw, ears, or neck. In the first two to three days, after surgery, the patient must take complete rest and some precautionary measures like eating ice pops to stay hydrated and sipping of water to avoid throat pain. Patient must consume ideal food like apple sauce, ice cream, pudding, warm and clear soup for cool recovery. Avoid eating spicy, crunchy or any hard snacks for few days after the Tonsillectomy surgery.

Take the medicines regularly and exactly as prescribed by the doctor. Consult the doctor immediately if a patient undergoes bleeding, fever or face breathing problem after a tonsillectomy surgery. Many a times patient snore for first two weeks after the procedure is normal and expected.

The most common symptoms of tonsillitis include: 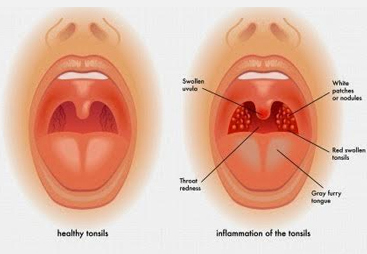